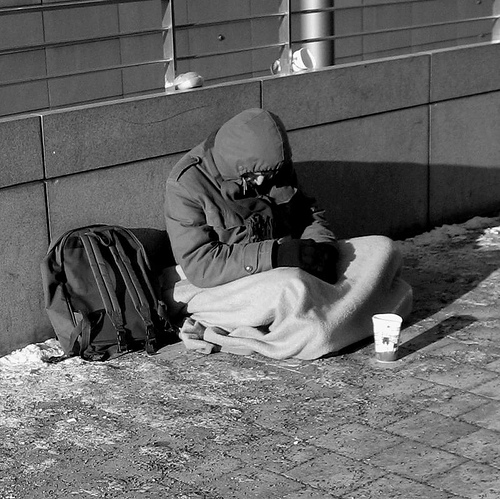 I can’t guarantee that I won’t cry a few times while writing this. But here it goes.

For the past 10 days, we’ve been opening up one “advent” bag every evening over dinner. Each bag contains four pieces of candy and a piece of paper containing 1-2 verses of the Christmas story told by St. Matthew in his gospel.

The first two days were a little boring for our 4 boys. I mean, Mary and Joseph traveling to Bethlehem? A Roman emperor taxing people? What does this even mean for little kids who’ve never paid for anything?

But then we reached the part of the story where Mary and Joseph were forced to stay in a stable outside, cold and alone. No one had any room for them. They did the best they could, even though it was lower than low.

I looked up at our 10 year old foster boy, and his head was bowed, his face drawn and serious.

Unlike his 5 year old happy go-lucky brother beside him, he remembers. He remembers the cold nights sleeping on the street or in someone’s car because his mother had nowhere safe for him to stay. Instead of protecting him and reaching out for help, she eventually abandoned him at a mobile home park.

My heart caught in my throat. I looked at him.

“How do you think Mary and Joseph felt?” I asked him.

“Sad. Cold.” he responded quietly, looking away. There were tears in his eyes.

I remember what he’s told me about this time last year. He, his mom and his brothers had just been evicted from their apartment. They spent months living on the streets, begging for their mom’s drug money on street corners before DSS finally took them into custody.

Suddenly, Mary and Joseph’s plight hurt my heart in a way it never had before. The Christmas story came alive and stuck with me all through the next day like a bad toothache.

The next night, we read about the Baby Jesus being born.

“Is that the guy we heard about in church on Sunday?” one of them asked.

It was all I could do to keep my own tears away.

The next night, we read about the shepherds lying out in the fields, watching over their flocks of sheep. Once again, both of our foster boys were paying close attention.

“What were they doing out there?” the younger one asked.

“Watching over the sheep so that they wouldn’t die!” I exclaimed. “There were LIONS and BEARS out there!”

The look of awe and excitement on his face was more than enough reward. He was hooked.

And the next night, we got to hear about the angels who appeared to the shepherds.

And then, tonight. The angel telling them not to be afraid because he has good news for all people.

At that moment, I had a sudden flashback to our conversation the night before. As I was tucking them in, the younger brother said, “Night night, don’t let the bedbugs bite!”.

Out of the blue, his older brother said to me, “You know, I’ve had bed bugs before. My grandma’s house was really old. She didn’t have anywhere else for me to sleep so I just had to deal with it.”

I didn’t know what to say.

He continued. “Where are we going to be living?”

“With us for a while.” I responded.

“What about after that? Like forever? Who’s going to take care of us?”

And I was once again struck by the good news of the angels. The people of Israel, who had been waiting for their Messiah, were about to be delivered. Their deepest need was about to be met.

Our foster boys constantly wonder about the same thing. When is my deepest need going to be met? Who is going to love me? When are the adults in my life going to stop failing me? When am I going to have a home? When is all the waiting going to be over?

I want to tell them about the One who will never leave them. The One who was despised and forsaken so that they don’t have to be.

Back in the present, I heard the conversation going on at the dinner table. The older one was looking at me intently.

“This is so cool.” he said, smiling. His face was absolutely radiant. “Have YOU ever heard this story before, Kelly?”

This comment stung most of all. The Christmas story is so often just a stale set of verses we read on Christmas Eve at an advent service. When you grow up with a story like this, you forget how awe-inspiring every single detail of Jesus’ birth really was.

How does one forget the wonder? All of nature rejoiced at the coming of the savior! Even the stars re-aligned around their focal point–the Savior of the World.

“Are you going to read this story next year too?” he asked.

I was taken aback. “Yes, it’s the Christmas story. We get to read it every year.”